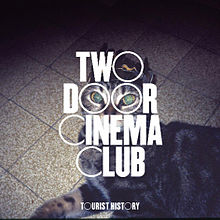 Tourist History is the debut studio album by Northern Irish indie rock band Two Door Cinema Club. It was released on 17 February 2010 by Kitsuné. The album is named for the reputation of the band’s hometown, Bangor, as a tourist attraction.
Tourist History won the Choice Music Prize for the 2010 Irish Album of the Year. The band said it was the first award they had ever won and donated the €10,000 prize money to charity.